DWR is involved in various conservation and breeding projects, which adds value to the reserve and conserves endangered species. We highlight some of these programmes here. 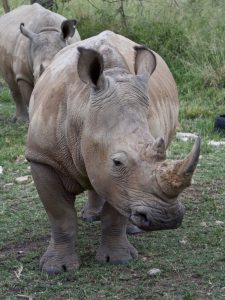 In February 2002, DWR introduced two young white rhino (Ceratotherium simum) bulls and heifers. These animals adapted extremely well to the habitats on the farm and we now have a substantial breeding herd of 17 animals. However, because of a sudden scourge of rhino poaching that began in 2006, one of our bulls was injured and late in 2012 we lost a cow that had a one-month-old calf at the time. We then made the tough decision to continue breeding rhino but to increase our security and dehorn them as an added deterrent. The rhino are dehorned under anaesthetic, using a technique pioneered in Zimbabwe by Dr Richard Kock, which removes the stump left by standard dehorning.

African buffalo (Syncerus caffer) were numerous in South Africa before the advent of the rinderpest, uncontrolled hunting and wholesale slaughter in the name of farming and veterinary health. By the 1950s, the only remaining buffalo populations were in the national parks. The movement of buffalo to private farms was not permitted because they were carriers of certain diseases. In 1994, an initiative to create a disease-free herd of Kruger buffalo led to the availability of a small core herd, which became available to game farmers. DWR introduced a herd of disease-free buffalo of the ‘Kruger’ genetic line during 2008. These animals have bred well and now number approximately 47. Because disease-free buffalo are in demand from other game farms and conservation areas, we are able to sell our progeny to other farms. With the revenue we earn, we are able to buy better bulls with different genetic makeup, thereby avoid inbreeding.

Golden wildebeest (Connochaetes) are a recessive colour variant of the blue wildebeest. These animals are prized by game breeders and command a high price, which contributes to the earnings of the farm. On DWR, we have two breeding herds, one of which is held in large camps so that they can be effectively managed; the best breeding bulls can be used on the cows carrying the recessive gold gene (known as splits) and their calves can be identified. The breeding bulls can then be moved around to avoid inbreeding and ensuring the vigour of the offspring. The other bigger heard runs on the full 1000ha of DWR.

When you spot a group of large herbivores on Dabchick Wildlife Reserve, look out for the tick control unit, also known as the red-billed oxpeckers (Buphagus erythrorhynchus). Although other birds such as glossy starlings are seen to follow and even perch on large herbivores, oxpeckers (which belong to the starling family) have evolved a specialist role, feeding on the ticks and fly larvae they find on their mammal hosts. Oxpeckers have sharp claws and short legs, which allow them to effectively cling on to the animals. Using a scissoring technique with their beaks, they remove ticks from the hair or pluck them from hairless areas. As they can eat up to 100 engorged adult ticks or 1 000 tick larvae, they make a significant contribution to the control of ticks on a game farm.

Both species of oxpeckers all but disappeared in farming areas in South Africa due to the use of toxic pesticides, but thanks to breeding and introduction programmes, mostly by the Endangered Wildlife Trust (EWT), they have been reintroduced on certain private game farms, and even stock farms that make use of tick remedies that are safe for the birds. In return for a sponsorship given by DWR owners, EWT made a flock of oxpeckers available for the reserve: the birds were captured in Kruger and kept in captivity for a limited quarantine period, where they were fed on blood and mince (well, they like it!). They were transferred to temporary cages on DWR and held for a while until the group adapted and then they were released onto the farm. A core group of birds has begun breeding on Dabchick – you will spot youngsters with their brown beaks amidst the adults, feeding off rhino, kudu, giraffe and eland, among others.

Oxpeckers play an important role in reducing tick numbers on free-living herbivores. While some of these species develop a resistance to certain ticks, others such as eland are very susceptible, and ticks can cause severe damage such as abscesses and even ear and/or teat loss due to tissue damage. Artificial tick control in wildlife is difficult and also has some other disadvantages, such as upsetting the immunity to tick-borne diseases. Using oxpeckers as partners in tick control is a more natural method and contributes to biodiversity.

Vultures play an important role in nature because they are scavengers that remove the carcasses of dead animals from the veld, recycling nutrients back into the ecosystem. Cape vultures have become endangered mainly due to malicious poisoning, despite the best efforts of conservation bodies and NGOs. A small population of Cape vultures present in the Waterberg were being supported by the provision of a vulture restaurant at Marakele until this was closed down some years ago. DWR decided to take over this role and, with the advice of VULPRO, a suitable site was chosen. EWT and Eskom assisted in making our powerlines safe for vulture activity. We place carcasses of dead game animals and livestock at the restaurant, ensuring that the animals are safe for consumption – we remove lead shot and ensure that livestock have not been treated with toxic remedies.

DWR has served as a release facility for wildlife shelters that rescue wild orphans or injured wild species, and conservation organisations such as de Wildt. We have previously released small species such as bush babies, caracal, servals, civet, African wildcat porcupine, and even hedgehogs and tortoises. We believe that a wide diversity of species is necessary for a healthy ecosystem and this also applies to predators. Although we breed some valuable antelope species, we do not control predators because we believe they are an important part of the food chain and ecosystem. Leopard, caracal, serval, jackal and wild cat are the main predators on the reserve, while brown hyena, warthog, bush pig and vultures provide valuable scavenging services. Follow the link to see the story of Bonnie the African wildcat, which was introduced in 2008.